Tell us about your experiences with this test.
The Tests » NWEA MAP® Test Overview » How is the NWEA MAP Test Scored?

How is the NWEA MAP Test Scored?

What is included in the NWEA MAP Test Score Report?

Grouping: Shows the selection made for optional grouping when the report was requested. Choices are gender, ethnicity, or none (default).

Test Type: Test taken, such as S/G (survey with goals).

Growth Measured from shows how your child is doing now, compared to a previous time (if available) the test was taken.

The RIT scale is used to chart your student’s academic growth from year to year. Your child’s RIT score is developed when he or she has answered 50 percent of the questions correctly and 50 percent incorrectly, identifies areas of relative strength or weakness and it helps his or her teachers plan for differentiated instruction within curriculum units.

Columns and summary statistics are applicable only in Achievement Status and Growth Summary Reports.

Projected RIT: Sum of the current RIT score plus the Growth Projection.

Count of Students with Valid Test Scores: Number of students in the class who have both a valid score and a growth projection.

Mean RIT: Average RIT score of students in the class.

This report taken from the official NWEA Site:

The colored line graph depicts a student’s progress and indicates academic ability and tracking with the indicators that follow. 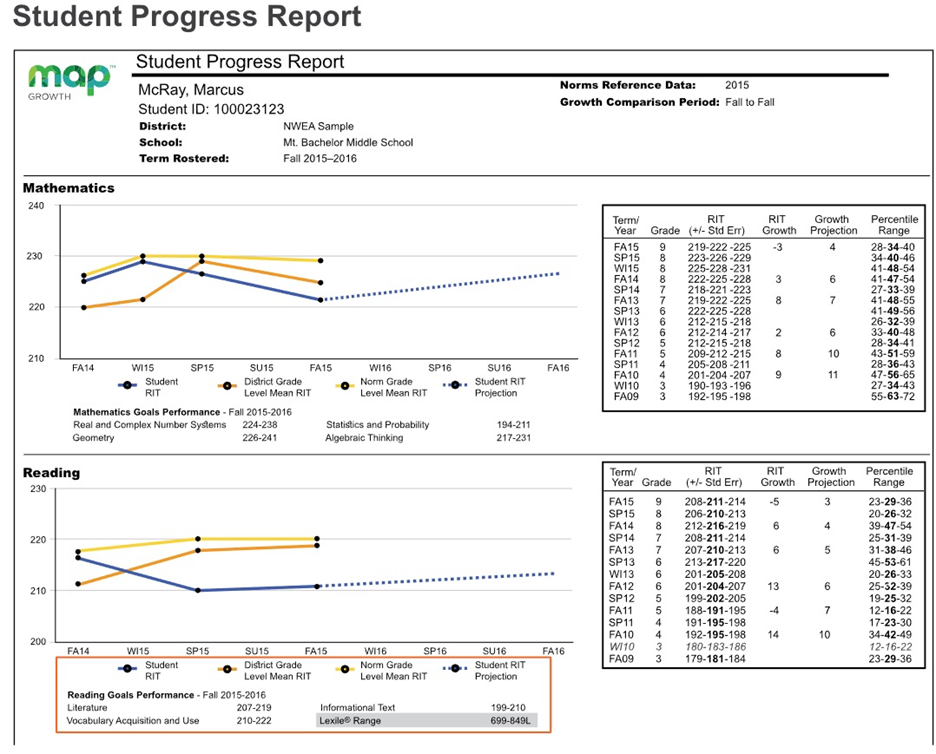 Individual Student Progress: The blue line indicates the student’s progress and gives the parent an idea as to how their child scored on the NWEA MAP test by subject level.

District Grade Level Mean: The orange line indicates the average student’s progress within the district. This allows the parent to look at their child’s score in comparison to other students in the same district that took the NWEA MAP test.

Norm Grade Level Mean RIT NWEA MAP Score: The yellow line indicates the average student progress for students who took the same MAP test at the same time in the rest of the country. This indicator is most useful to teachers to compare how the students in their classroom and in their district are performing compared to students nationwide.

Future Progress Prediction: The dotted line on the MAP testing score chart is a prediction of how well your student will perform in the future based on their past performance. It is the sum of the current RIT score plus the Growth Projection in the table to the right. This is a prediction of your student’s NWEA MAP Score on future tests.

RIT (+/- Std Err): The middle score is the actual NWEA MAP score on this particular test. The score on either side is the score range that the student would likely make if they took the MAP test again in a short period of time.

RIT Growth: This number shows a student’s RIT growth from one test term in one calendar year to another. (Example: FA14 RIT 216 and FA15 RIT 211; therefore, the RIT Growth is -5.)

Growth Projection: This number indicates the average growth of students in the same grade at the same term at a similar RIT score.

Percentile Range: The number in the middle is the student’s percentile rank. It indicates the percentage of students who had an RIT score below this student’s MAP test score. The numbers on either side represent the RIT +/- STD Err of how the student would score if they took the MAP test again within a short period of time.
Want to try us out? Sign up for a free account today and get 100 practice questions.

Our school only uses the Screening MAP test, not the MAP Growth test. When my son finished the test it just gives a number. How can I make sense of this number? Is the Screening Test as accurate as the Growth Test?

I am looking for MAP test for both ELA and Math practice questions?

My son is 1st grade student and he has RIT 182 score on math and RIT 186 score for reading, please advise,

I am a special education teachers and wonder if there is a table that shows a grade level equivalent to the RIT score. I want it just incase the RIT score does not help the parent to see where their student is in a language they know and understand.

Thank you for reaching out to us. The RIT score for each grade level will change depending on when the test is administered. Here is a chart that shows the grade equivalent for each of the 4 areas covered by the MAP based on 2020 norms: https://decorah.k12.ia.us/app/uploads/2021/02/MAP-RIT-Scores-2020-Norms.pdf