The TerraNova Test serves as an achievement test that is administered to students in grades K-12. The exam strives to assess higher-order thinking as well as other academic skills that the child has been taught in school. The test measures specific skill criteria such as achievement in reading, language arts, mathematics, science, social studies, vocabulary and spelling. The test is formatted as a multiple choice test, however 1st graders and above may be given free-response questions. Below are several TerraNova sample questions that are intended for the sixth grade level. Each practice question will reflect a specific subtest that your child will come across.

Parents say to your child: Please tell your child to read the question and circle the best answer. 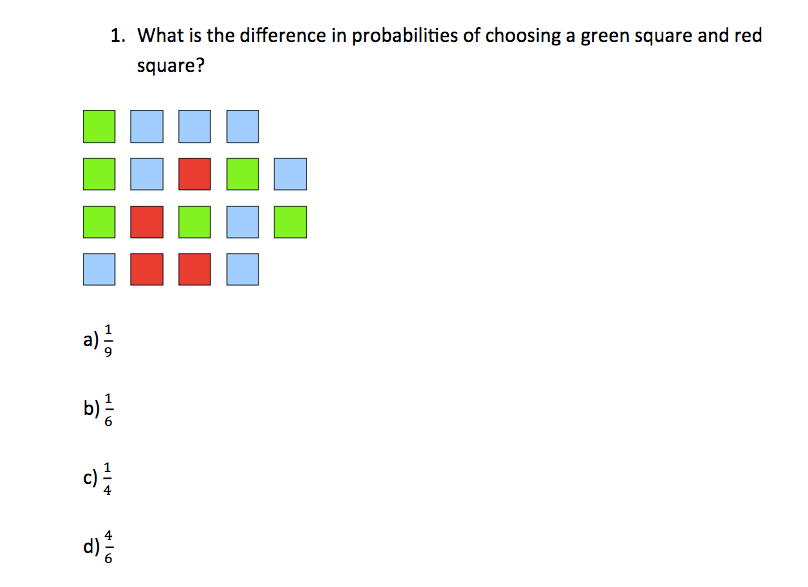 Parent say to your child: “This is a test that will measure how well you understand what you read. There are 5 passages for you to read. Each is followed by questions about the piece you read. Choose the answer that you think is best.”

Do You Know Mario?

1    In 1980, Nintendo of America created its first video game: Radar Scope. It flopped. They
2 knew they had to do something quickly to save their company. Shigeru Miyamoto, a staff artist,
3 created a game called Donkey Kong, featuring “Jumpman,” a chubby carpenter in red and blue. He
4 was a carpenter because of the constructions site setting. (He later became a plumber in Mario Bros
5 because it was an underground setting.) The name Jumpman didn’t stick, because Nintendo had to
6 decide on the characters’ names before it released the game and Jumpman just wasn’t a very good
7 name. It is said that just around that time, the landlord came and asked for the warehouse rent
8 payment from Nintendo. The landlord’s name happened to be Mario, so that became Jumpman’s
9 name.

10    Back in the 1980’s, computer graphics were not nearly as sophisticated as they are today.
11 Mario’s hat is the result of the designer inability to render realistic, movable hair – remember, the
12 graphics were much more limited than today. Mario’s signature overalls actually serve a purpose
13 other than holding his tools. They actually make his arm movements more obvious and easier to
14 see. His oversized mustache and big nose helped animators avoid trying to animate a tiny mouth.
15 Interesting fact: originally Mario wore a blue shirt and red overalls in Donkey Kong, but the colors
16 were switched when Mario Bros came to arcades.

17    The other characters in Mario games also have interesting stories behind their names.
18 Donkey Kong cam from Miyamoto looking up the English Translation for the Japanese word for
19 stupid and “donkey” was the result. Since the character was a gorilla, Kong seemed like the perfect
20 fit. The American Nintendo team chose the name Luigi to go with Mario, and incidentally, “ruigi” in
21 Japanese means similar. Wario’s name come from the Japanaes work “warui”, or bad, combined
22 with Mario.

23    For over 20 years, Super Mario Bros was the best-selling video game, with over 40 million
24 sold worldwide. It has had to be recreated for every new Nintendo gaming system console. The onley
25 video game that has outsold Super Mario Bros is Wii Sports, in 2009.

26     Believe it or not, by 2011, Mario has been featured in 127 games and has been a playable character
27 in 94. The first several games were in arcades only. Since home systems began, there have been
28 increasing numbers of Mario games for every Nintendo system and even for the PC. That’s a lot of
29 Mario!

Super Mario Bros has sold over

Parent say to your child: “For the next group of questions, read the first 3 lines to yourself. You will notice that the story needs some punctuation corrections. Look for mistakes with periods, commas, question marks, quotation marks, apostrophes and so on. Mark the circle in the row of words that contains a mistake with punctuation.

This helped a lot for me to prepare for the test I have to take soon. I hope this will help you too the way it helped me.