If you and your child have wondered what kinds of questions will appear on the fifth grade CogAT, below are some examples! These sample questions should provide you with a better idea of the quantitative, verbal and non-Verbal skills that your child should focus on, and demonstrate during the exam. All sample questions are similar to the most current version of the CogAT, “Forms 7 and 8”.

In this section, you will be given a mathematical equation. Choose the answer that should replace the ? or the

Look at the numbers in each row below. There is a rule that governs the order in which the numbers occur in the series. Figure out the rule and then choose the number that comes next from the answer choices below.

Parents say to your child: on the top row, you will see how a square piece of  paper is folded sometimes once, sometimes twice, sometimes three times. Holes are then punched after the paper has been folded. Choose the answer in the second row that shows how the folded piece of paper would look like after it is unfolded. 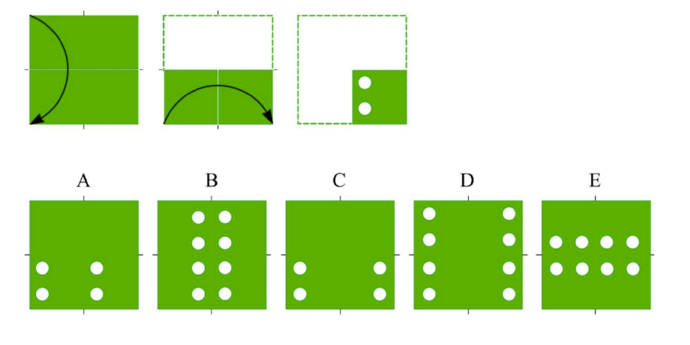 i wanted to get free cogat worksheets

where is free cogat print sheet

I want to try COGAT

the cogat practice test was a little confusing, it really challenged me. i did good. – Meg M.

Our 100 Free Questions are a great sampling from many of the tests we support. Here are step-by-step instructions on how to access the 100 Free Practice Questions (No purchase necessary):

3.) Once redirected, you will see a large, blue box that reads “FREE QUESTIONS.” Click the orange button that reads “UNLOCK NOW.”

I wish I could have free worksheets to Print

We offer our 100 free questions as a sample and you can start those anytime! Please create a free account and unlock them!

All the best,
Ryan

I am doing the cogat test today

Best of luck to you!

These sample questions have helped me, but I have seen many of these questions on other websites!

We have practice questions for the Cogat test for grades K-8. Please take a look at our 100 Free Practice Questions and membership prices on the Buy Now page.