If you and your child have wondered what kinds of questions will appear on the 7th grade CogAT, below are some examples! These sample questions should provide you with a better idea of the quantitative, verbal and non-Verbal skills that your child should focus on, and demonstrate during the exam. All sample questions are similar to the most current version of the CogAT, “Forms 7 and 8”.

In this section, you will be given a mathematical equation. Choose the answer that should replace the ? or the

In the Figure Classification subtest, the child is shown 3 figures on the left that are related in some way The child must choose an answer on the right that goes with the first 3 figures in exactly the same way. When the questions get harder, the 3 figures are on the top and the answer choices are below, but the reasoning is the same.

Parent say to your child: The first 3 figures on the left (or, on top) relate to each other in some way. Find a figure to the right of the line (or, below the line) that goes with the first 3 figures in exactly the same way.

Look at the numbers in each row below. There is a rule that governs the order in which the numbers occur in the series. Figure out the rule and then choose the number that comes next from the answer choices below. 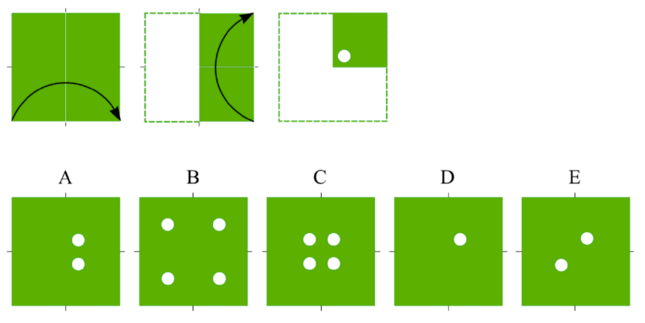 2.) c- One horizontal line, three small triangles looking up, down and to the right

That was helpful, I’m still confused with most figure classifications

This was a good experience, my child actually learned a few things from this!!!

Testing Mom is a wonderful site that really helped my daughter with her test preparations. Her exam is coming up soon and I think she is much better prepared than she was before to take and excel at the CogAt. Thank you Testing Mom!